Jimmy Houston Adventures is on You Too TV; JHL.TV; My Family TV; Hunt TV, Pursuit and on Destination America and the American Heroes Network in the 3rd  quarter.  More networks are added as they become available.

Jimmy is well known as the hardest working pro in the country. In addition to working a lot of trade shows and store promotions, he speaks at a lot of churches around the country.  Since winning The Oklahoma State Championship as a college senior in 1966, Jimmy Houston has gone on to win over a million dollars in bass tournaments. He has fished 15 BASSMaster Classics and won the B.A.S.S. Angler of the Year title in both 1976 and 1986.  A legendary angler, Jimmy was inducted in to the National Freshwater Fishing Hall of Fame in 1990 and the Professional Bass Fishing Hall of Fame in 2002. He was inducted into the IGFA Freshwater Fishing Hall of Fame and the Legends of the Outdoors Hall of Fame in 2008. Jimmy was named King of Sports for Fishing in 1989.  In June of 2004, the Jim Thorpe

Association recognized Jimmy as the Jim Thorpe Man of the Year. Jimmy was recognized as the 2013 Distinguished Alumnus of NSU.  In 2016, he was inducted into the Oklahoma Sports Hall of Fame.  Also in 2016, he celebrated his 50th year of fishing national Tournaments. In 2017, he was awarded the National Lewis and Clark Conservation Award along with Bill Dance and Roland Martin.  In 2017, Jimmy was presented a Bass Pro Shop Angler of the Century award.  Jimmy continues to compete in the FLW Tour tournaments fishing on the Shell Rotella Team.

Jimmy has written five books including “Caught Me a Big’un” which was a #1 selling fishing book.  “Hooked for Life” and “The Reel Line” are spiritual and inspirational collections taken from fishing situations. His latest book, “Catch of the Day”, is a 365 day daily devotional built around fishing tips, tales, and events.  An updated “Catch of the Day” has been released in 2012.

Jimmy is a deacon at Midway Hill Baptist Church near Sulphur. OK.  Jimmy’s wife of 55 years, 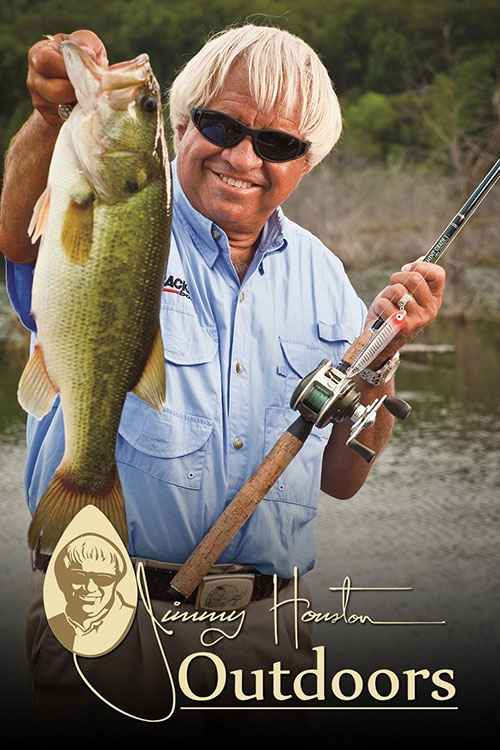