Mark Thompson is a popular and highly sought after ventriloquist comedian and one of the funniest Clean Comedy Entertainers and Christian Entertainers in the world. His hilarious sidekicks and audience involvement is loved by all ages. He has a wide variety of acts and hilarious characters that will brighten your event and warm the hearts of your audience, no matter what the age or occasion. He can perform for corporate and community events as a clean comedy entertainer or for churches as a Christian ventriloquist. Thompson tops the list as one of the best Christian entertainers and family acts in the country. Mark’s ability to adapt his show for such diverse audience types makes him a vibrant, cutting edge and highly sought after entertainer. He’s a cool and funny guy who travels with a bunch of dummies.

Over the years Mark has performed for some of the nation’s biggest celebrities, events and organizations such as: Disney Cruise Line, Microsoft, General Motors, Boeing, Venture Bank, Ambassador Gary Locke, Fisher Mills, Evergreen State Fair, Oregon State Fair, Orange County Fair, Maria Shriver-Schwarzenegger, Bob Barker, Gatlin Brothers, McDonald’s, King 5 TV Seattle, Viking Bank, Bill Gaither, AT&T, Novartis Pharmaceuticals, Monsanto, Yakima Legends Casino, American West Bank, Washington State Bar Association, Paris Hilton family Christmas Party. Mark has performed on the DISNEY CRUISE LINE many times. He has been on TELEVISION throughout the years and was selected by NBC to be in a series about ventriloquists and their dummies. He has performed over 3,000 SHOWS throughout his professional career. HILARIOUS AUDIENCE PARTICIPATION is a highlight of his show.

Mark Thompson has been successfully delivering God’s message of love, devotion and forgiveness for 20 plus years with his incredible gifts of ventriloquism, song and comedic puppetry. With the help of his endearing puppet friends, Red, Kirby and Crackers and his unique approach to audience participation, he creates a vibrant show that is robust with music, laughter and most importantly the Gospel. His special ability to entertain in a wholesome, Christian light always uplifts audiences of all ages to new heights of understanding God’s love. 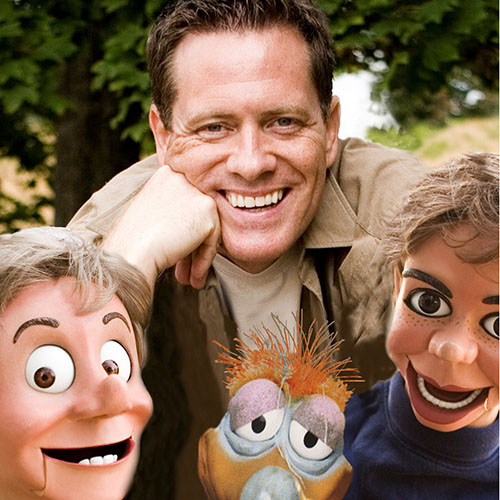 Mark’s timing, delivery, material, humor, and wide-ranging audience appeal are absolutely first rate! Mark doesn’t just come up to the standard of great entertainment, he IS the standard! See him! Get him! Now!

In all of my 30 years of ministry I have never met a better entertainer and minister than Mark Thompson. Mark is a professional on stage and has an easy-to-work-with demeanor off stage. These combine to make him a premier act for any church event…

“Mark was excellent. Great with our families. He kept them laughing the whole time. But more importantly he kept them interested in the gospel that he used throughout his presentation. For directors – Mark was extremely easy to work with. Don’t hesitate to book.”