Women Who Dare to Believe

Two veteran actresses bring to life 21 women from the Scriptures! Bonnie Keen and Nan Gurley portray the women God used to fulfill the covenant and bring in the Messiah. With cutting-edge dialogue, original music and creative inter- action with the audience, this 90- minute musical will inspire viewers with the stories of women who dared to believe and pushed against the pressures and culture of their day.

The scarlet thread of hope runs through the stories of Rahab, Tamar, Leah and Rachel, Deborah and Esther, Anna and Mary. Like women today, these women knew this was their hour, this was their moment. On a bare stage, two women using 20 feet of scarlet fabric leave audiences breathless with the stories of the blood of Jesus running through time from the Garden to the empty tomb. 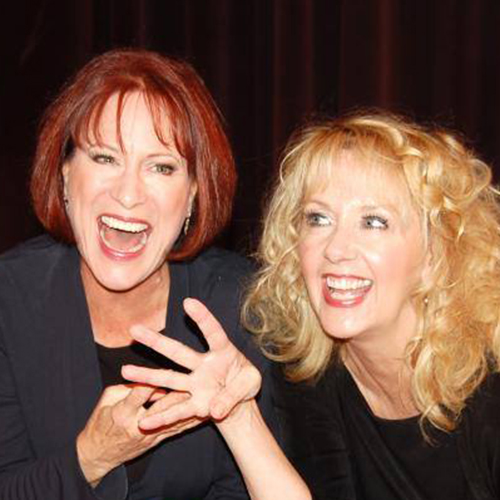 …has been awarded Best Actress “Tennie” Awards by The Tennessean for her work in “The Seagull”, “Cyrano”, “The Little Foxes”, “A Streetcar Named Desire” “Crimes of the Heart” and “The Storybuilders”. She has been a guest soloist on numerous occasions with Tennessee Opera Theater and most recently seen in lead roles as the Witch in “Into the Woods”, Dolly Levi in “Hello Dolly” and Golde in “Fiddler On The Rood” (Studio Tenn). She has performed extensively with The Nashville Shakespeare Festival in the roles of Queen Elizabeth in “Richard III” and Mistress Quickly in “Merry Wives of Windsor”. She co-wrote with Denice Hicks and Clair Syler a new work entitled, “Shakespeare’s Case”. Nan has performed her one-woman show, “The Diary of Opal Whitley” at the Piccolo Spoleto Festival in Charleston S.C. She is a two-time Dove Award wining songwriter and has written and recorded an album of songs for children entitled, “Small Wonder”. Nan is the author of three children’s books and a 1999 recipient of the Avalon Award for Creative Excellence given by Lipscomb University. She is a member of the Prism Art League and studies painting with Melanie Jackson.  Nan is currently writing a book entitled GOD IS SO NOT RANDOM and is proudest of her role as wife to Wayne and mother to Erin and Lena.

…is a founding member of the critically acclaimed recording trio First Call. Bonnie is the recipient of three Dove Awards, five Grammy nominations, and an Emmy nomination for her work as a recording artist, author and speaker. Bonnie has performed on “The Grammy Awards” and “Johnny Carson’s Tonight Show” and across the United States, Canada, Asia and Europe with First Call, Amy Grant, Sandi Patty, and Bebe and CeCe Winans. Bonnie has three solo CDs and authored three books with Harvest House Publishers. Her story graced the covers of Today’s Christian Woman and Virtue magazine. Bonnie’s vocals can be heard on commercials for Pepsi, Dodge Trucks, Fritos, Wrigleys Gum and Coke, work with Garth Brooks, Steve Winwood, Barry Manilow and Michael Crawford. She travels with Windborne Music’s “Tribute to the Music of Michael Jackson” performing most recently with the Malaysian Philharmonic Orchestra. Theatrical highlights include the roles of The Witch “Into The Woods” (Circle Theatre), Grace in “Cinderella” with the Nashville Symphony (Studio Tenn), Petie Quince (The Nashville Shakespeare Festival), Fanny Bryce (Keeping Scores), Maud/Pinky in “Pride’s Crossing” (Lipscomb University), Mama Legend “Scarecrows” (Playhouse Nashville), Mrs. Whitehead in “Man and Superman”(Blackbird Theatre) and Gingy in “Love, Loss and What I Wore”. Ongoing therapy includes Nashville studio musician performances with The Eaglemaniacs private coaching and writing for a new cd and collection of stories. Bonnie is deeply grateful to cheer on her husband Brent and their two children, Courtney and Graham Keen. www.bonniekeen.com