Robyn was influenced at a young age by a positive role model who spoke at her school, and today finds herself reaching out in the same way and providing hope and encouragement though a solid Christian based message that is relative, relational, and entertaining. Robyn’s performances are centered around exciting, captivating basketball dribbling and spinning demonstrations that will not only leave a lasting impression, but will also be the highway for an inspirational message that will impact today’s youth and tomorrow’s leaders.

No matter what age of the audience, Robyn has a unique way a capturing their attention and becoming a memorable part of their life for a very long time. With all the influences around the youth of America, Robyn believes through her speaking, she can become an influence that motivates them to make the right decisions in their life.

Robyn is one of three women in the U.S. who can spin 10 basketballs at the same time.

Robyn has entertained during halftime for many NBA teams including the Magic, Hornets, Cavs, Pacers and Rockets. Robyn has been recognized 2X on ESPN’S Top 10 plays of the day from her halftime appearances. She has also made numerous appearances at WNBA, college games and the men’s and women’s final four. She has entertained with organizations such as The Fellowship of Christian Athletes, Upward Basketball and The Billy Graham Evangelical Association. Robyn is available for both faith based events (Upward,VBS, Church Services) AND sporting venues (Halftimes, Camps and Sports Banquets).   She has a great program to use for Opening or Closing Ceremonies of any event!

Robyn played college ball at Southwest Baptist University in Bolivar, Missouri and graduated with a degree in Communications (1995). She is from Mountain Grove, Missouri and now resides in Orlando, Florida with her husband Steve and their two children, Ty (10) and Lexie (8). 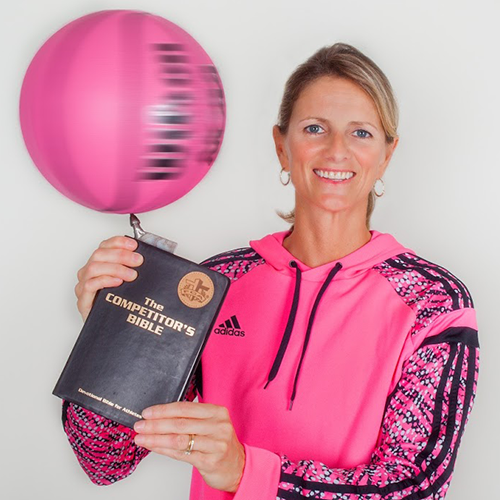 “Robyn Slain is unbelievable. She amazes crowds all across the country with her basketbll handling magic. I have seen Robyn perform and she is exciting to watch. I highle recommend her.”

“Robyn is incredibly gifted. She is not only entertaining, but does a tremendous job at presenting the gospel. Her heart for people and her sweet spirit shine through in everything she does.”

“I have watched Robyn mesmerize young people and old alike and it continues to be both new and exciting. However, it is the content of the message that always motivates me to find a way to involve her with both my campers and staff. Her program is one of the best tools I have found to impart that character counts.”

Hands down, Robyn Slain was the most, all-around, best Upward celebration entertainer we have had! Her ball handling performance was amazing and it definitely kept the attention of both kids and adults the entire time. She gave a very high energy and professional performance and a clearly communicated gospel presentation. Robyn top notch and I highly recommend her.